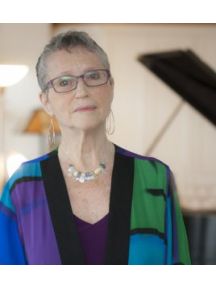 "Shulamit Ran has never forgotten that a vital essence of composition is communication." So ran the review in the Chicago Tribune following the premiere of Legends by the Chicago Symphony Orchestra. This sort of reaction is by no means unusual. Around the country, from Seattle to Baltimore to Houston, commentary on her music typically runs thus: "gloriously human" and "compelling not only for its white-hot emotional content but for its intelligence and compositional clarity" ; "Ran is a magnificent composer." It is hardly surprising, then, that Symphony, which has drawn references to "the superior quality of her musical imagination and artistic invention" and which has been hailed as "a work that will reward each new listening" should have won the 1991 Pulitzer Prize for Music. Ms. Ran's work displays an emotional quality and technical superiority that has led critics to acclaim her work as "written with the same sense of humanity found in Mozart's most profound opera arias or Mahler's searching symphonies."

Ms. Ran began composing songs to Hebrew poetry at the age of seven in her native Israel. By nine she was studying composition and piano with some of Israel's most noted musicians, including composers Alexander U. Boskovich and Paul Ben-Haim, and within several years was having her early works performed by professional musicians, as well as orchestras. She continued her piano and composition studies in the U.S., on scholarships from the Mannes College of Music in New York and the America Israel Cultural Foundation, with Nadia Reisenberg and Norman Dello Joio, respectively, later studying piano with Dorothy Taubman. In 1973 she joined the faculty of the University of Chicago, where she is now the Andrew MacLeish Distinguished Service Professor in the Department of Music and artistic director of Contempo, formerly the Contemporary Chamber Players. She lists her late colleague and friend Ralph Shapey, with whom she also studied in 1977, as an important mentor.

Among her numerous awards, fellowships and commissions are those from the Martha Baird Rockefeller Fund, the Ford Foundation, the National Endowment for the Arts, the Guggenheim Foundation, the Fromm Music Foundation, WFMT, Chamber Music America, the Serge Koussevitzky Music Foundation in the Library of Congress, the American Academy of Arts and Letters, Eastman School of Music, the American Composers Orchestra (Concerto for Orchestra), the Chamber Music Society of Lincoln Center (Concerto da Camera II), the Philadelphia Orchestra (Symphony, first performed in 1990, Pulitzer Prize 1991, first place Kennedy Center Friedheim Award 1992), the Chicago Symphony Orchestra (Legends), the Baltimore Symphony (Vessels of Courage and Hope), and many more.

Orchestral works since the prize-winning Symphony include Legends (a joint commission celebrating the centennials of both the Chicago Symphony and the University of Chicago), which premiered in October, 1993, and Vessels of Courage and Hope, commissioned by the Albert Shapiro Fund and premiered by the Baltimore Symphony Orchestra in 1998, to commemorate the 50th anniversary of the establishment of the State of Israel and the voyage of the S.S. President Warfield/"Exodus 1947."

More recent works include the flute concerto, Voices, commissioned by the National Flute Association for its year 2000 convention; Supplications, for chorus and orchestra, premiered in November, 2002 by the American Composers Orchestra at Carnegie Hall; a Violin Concerto premiered in June, 2003 by Israeli violinist Ittai Shapira and British conductor Charles Hazelwood, also at Carnegie Hall; Bach Shards, commissioned by the Brentano String Quartet as part of the quartet's Art-of-Fugue project and performed in many major venues since its premiere; Under the Sun's Gaze (Concerto da Camera III), an ensemble work for nine players for the San Francisco Contemporary Music Players commissioned by the Koussevitzky Foundation and premiered in April, 2005 in San Francisco; Fault Line for ensemble, commissioned by the Chicago Symphony MusicNOW series, premiered in May, 2006 at Chicago's Symphony Center; and Credo/Ani Ma'amin, part of And on Earth, Peace: A Chanticleer Mass, commissioned and widely performed by Chanticleer, the noted 12-man vocal ensemble, following its premiere in New York City’s Metropolitan Museum of Art in April, 2007.

In 1990, Ms. Ran was selected by Maestro Daniel Barenboim to be Composer-in-Residence with the Chicago Symphony Orchestra as part of the Meet the Composer Orchestra Residencies Program, a position she held for seven seasons. From 1994 to 1997, Ran also served as the fifth Brena and Lee Freeman Sr. Composer-in-Residence with the Lyric Opera of Chicago. Her first opera, Between Two Worlds (The Dybbuk), which received its much-acclaimed premiere in June, 1997, was commissioned by the Lyric Opera of Chicago, and was described in Opera News as "the most powerful new music-theater piece to emerge from Lyric's composer-in-residence program." The European premiere of Between Two Worlds took place in May, 1999, at the Bielefeld Opera, in a German translation.

Ms. Ran's music has been played by many of the world’s leading orchestras, including the New York Philharmonic, the Israel Philharmonic, the Chicago Symphony, the Philadelphia Orchestra, the Cleveland Orchestra, the Jerusalem Orchestra, l'Orchestre de la Suisse Romande, the Amsterdam Philharmonic, the Baltimore Symphony, the National Symphony, the Orchestra of St. Luke's, and the American Composers Orchestra; her works have been conducted by, among others, Zubin Mehta, Daniel Barenboim, Pierre Boulez, Gary Bertini, Christoph Von Dohnanyi (in two U.S. tours), Gustavo Dudamel, and the late Yehudi Menuhin. Other performers include the Contemporary Chamber Players of the University of Chicago under Ralph Shapey and Cliff Colnot, Da Capo Chamber Players, the New York New Music Ensemble, the Contemporary Chamber Ensemble under Arthur Weisberg, Twentieth Century Consort, Monday Evening Concerts in Los Angeles, New York Philomusica, the Pennsylvania Contemporary Players, on "Music Today" in New York directed by Gerard Schwarz, the Mendelssohn String Quartet, the Lark Quartet, the Penderecki Quartet, the Cassatt Quartet, the Peabody Trio, Musical Elements, the San Francisco Contemporary Music Players, Callisto Ensemble (for which Ms. Ran was the 2006-2007 theme composer), both Collage and Musica Viva in Boston, the Chicago Symphony Orchestra's MusicNOW, and the Chamber Music Society of Lincoln Center. Ms. Ran's works have been performed at the Library of Congress, Kennedy Center, and at the Tanglewood, Aspen, Santa Fe and Yellow Barn summer festivals, among many others. In 1989, her second string quartet, "Vistas," commissioned by C. Geraldine Freund for the Taneyev String Quartet of Leningrad, received its first performance. It was the first commission given in this country to a Soviet chamber ensemble since the 1985 cultural exchange accord between the former Soviet Union and the United States.

Shulamit Ran, who formerly performed extensively as a pianist in the U.S., Europe, Israel and elsewhere, is presently the Andrew MacLeish Distinguished Service Professor in the Department of Music at the University of Chicago, where she has taught since 1973. In 1987, Ms. Ran was Visiting Professor at Princeton University. She has received honorary doctorates from Mount Holyoke College (1988), Spertus Institute (1994), Beloit College (1996), the New School of Social Research in New York (1997), and Bowdoin College (2004). Ms. Ran was elected a Fellow of the American Academy of Arts and Sciences in 1992 and of the American Academy of Arts and Letters in 2003. Her works are published by the Theodore Presser Company and by the Israeli Music Institute. Recordings have been released on more than a dozen labels, including Albany, Angel, Bridge, Centaur, CRI, Erato, Koch International Classics, New World, Vox, and Warner Classics, with several all-Ran discs available.