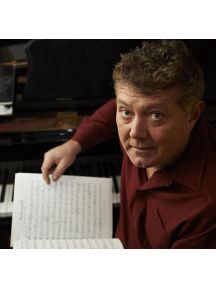 Robert's career has spanned both music and visual arts, creating award-winning work in both fields. Raised in New York City’s Greenwich Village by parents who were active in the arts, he was immersed in music, theater, literature, and the visual arts from an early age. His experience includes working for a number of years as a guitarist and composer in New York City, producing as well as performing on many recordings of jazz, blues, and popular music. In addition, he has composed for both theater and film.

He's an active composer and educator, bringing to both endeavors his trademark enthusiasm and appreciation for artists and students from diverse backgrounds and disciplines. He has composed a sizeable body of art music, released several CDs of original compositions, and toured the United States and Europe. Robert is well versed in the latest music computer technologies and maintains a state-of-the-art recording studio.

His portfolio of compositions includes numerous pieces for flute and flute ensemble, A Quickening, a concerto for flutes and percussion; a ballet, The Return of Odysseus; and many works for both large and small ensembles.

Robert has taught university level courses in theory and composition and has received a number of prestigious awards and commissions for his compositions. He is the author of Composition in the Digital World, Conversations with 21st Century American Composers, published by Oxford University Press.

Dr. Raines has degrees in Theory and composition from The Florida State University School of Music, The Shenandoah Conservatory of Music, and the Berklee College of Music.