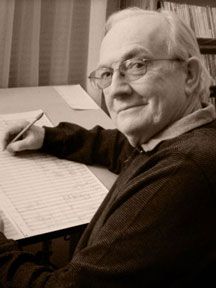 Robert Jager was born in Binghamton, New York in 1939, and received his education at the University of Michigan. For four years he served in the United States Navy as the Staff Arranger at the Armed Forces School of Music. He joined the Tennessee Tech faculty in 1971 and recently retired as Professor of Music and Director of Composition and Theory.

Mr. Jager has conducted and lectured throughout the United States, as well as in Canada, Europe, Japan and the Republic of China. He has over one hundred published works for band, chorus, orchestra, and various chamber combinations. His orchestral music has been performed by the National, Nashville, and Charlotte Symphony Orchestras among others. He has received commissions from all five Washington D.C.-based military bands, the Tokyo Kosei Wind Orchestra, and the Universities of Michigan, Arkansas, Illinois, Purdue and Nebraska Wesleyan.

He is the recipient of numerous awards, including the Harvey Gaul Award, Phi Mu Alpha's Orpheus Award, a Tennessee Arts Commission's Individual Artist Fellowship, the Caplenor Faculty Research Award at Tennessee Tech, the American School Band Directors Association's Volkwein Award, and a MacDowell Colony residency. He is the only three-time winner of the American Bandmasters Association's Ostwald Award.