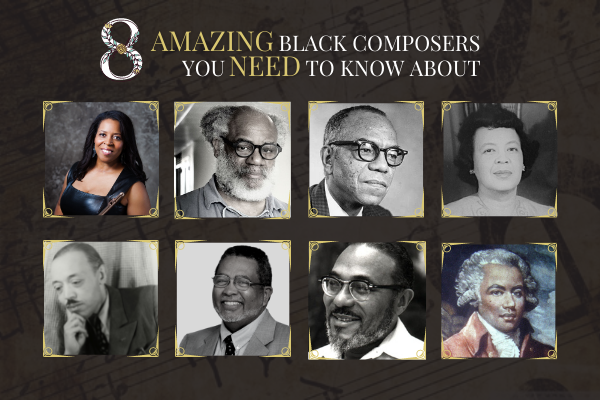 Named Performance Today's 2020 Classical Woman of the Year and described as one of the "Top 35 Female Composers in Classical Music" by critic Anne Midgette of the Washington Post, it’s no exaggeration to say that Valerie Coleman is among the world's most played composers living today, with many of her pieces fast becoming an established part of the standard repertoire. The Boston Globe describes Coleman as having a “talent for delineating form and emotion with shifts between ingeniously varied instrumental combinations” and The New York Times declares her compositions “skillfully wrought...buoyant.” With works that range from flute sonatas recounting stories of humans trafficked during Middle Passage voyages and orchestral works based on the nomadic movement of Roma peoples to scherzos about moonshine in the Mississippi Delta region and use of motifs based on Morse Code, Coleman’s output has been highly regarded as a deeply relevant contribution to modern music.

Fun fact: While still a student, Ms. Coleman organized and began playing in a chamber music ensemble which she named Imani Winds, which today is one of the premier wind ensembles in the world. Imani is the Swahili word for faith, and, when forming the group, Ms. Coleman sought out African American woodwind players whom she felt might approach classical music from a culturally similar perspective.

Then dive in to Wish, a tone poem for flute and piano that is dramatic for both players alike:

Learn more about Ms. Coleman here and in this interview with Performance Today:

Born in Washington, D.C., composer Jeffrey Mumford has received numerous accolades over the span of his career, including the Academy Award in Music from the American Academy of Arts & Letters, a Fellowship from the Guggenheim Foundation, and an ASCAP Aaron Copland Scholarship. He is also a past winner of the inaugural National Black Arts Festival/Atlanta Symphony Orchestra Composition Competition.

Mr. Mumford’s music has been performed extensively by major orchestras, soloists, and ensembles in the United States and abroad. He has been commissioned by the Los Angeles and BBC Philharmonics, the Library of Congress (co-commission), the Chicago & National Symphonies Orchestras, the San Antonio Symphony, the Sphinx Consortium, the Fromm Music Foundation, and the Walter M. Naumburg Foundation.

Fun Fact: Mr. Mumford often titles his works using exclusively lowercase letters because he believes they best fit his conception of the music. In his words, “I look at it in terms of an experience that you’re walking into that’s already progressing...A capital letter is kind of an impediment”.

Ulysses Kay was mentored by William Grant Still at the University of Arizona, where he began to craft his signature neoclassical style. Although he was a capable student of piano, violin, and saxophone, it quickly became clear that composition was his true calling as he won awards, fellowships, international scholarships, and grants to continue writing (including the prestigious Rome Prize and a Fulbright, just to name a few). One year of study with prominent neoclassicist Paul Hindemith at Yale solidified his reputation as a neoclassicist to watch. Prolific in his creation, Ulysses Kay wrote five operas, twenty large orchestral works, and scads of choral, chamber, and film compositions.

Fun Fact: Kay served as a musician in the United States Navy during WWII.

Begin your journey into his oeuvre with his uplifting Symphony No. 3, the "Sunday Symphony", performed here by the Fort Smith Symphony Orchestra:

Margaret Bonds grew up in a musical home where artists such as soprano Abbie Mitchell and composers Florence Price and Will Marion Cook were frequent guests. Bonds began her studies at Northwestern University in 1929 at 16. She would go on to complete Bachelor and Master of Music degrees in Piano and Composition despite being in an environment of open racial hostility.

I was in this prejudiced university, this terribly prejudiced place…. I was looking in the basement of the Evanston Public Library where they had the poetry. I came in contact with this wonderful poem, “The Negro Speaks of Rivers,” and I’m sure it helped my feelings of security. Because in that poem he tells how great the black man is. And if I had any misgivings, which I would have to have – here you are in a setup where the restaurants won’t serve you and you’re going to college, you’re sacrificing, trying to get through school – and I know that poem helped save me.

Soon after, she set out for New York, where she would later study at Juilliard and become close friends with poet Langston Hughes, setting many of his poems to music. Bonds is especially remembered for her deeply felt vocal music and her spiritual arrangements, some of which have been favorites of singers such as Jessye Norman, Kathleen Battle, and Leontyne Price.

Fun fact: Bonds wrote her first musical work at the age of five.

To get a sense of the arrangements that made Bonds so famous, start with Price’s breathtaking 1962 rendition of Bonds’ deeply moving and powerful He's Got The Whole World In His Hands:

Prolific and influential, many call him the Dean of African American composers— and it’s not hard to see why.

Fun fact: Still graduated as class valedictorian of his high school at the age of 16 and studied medicine before pursuing music. He also served the United States Navy in World War I. After the war, he went to Harlem, where he rubbed shoulders with influential cultural icons Langston Hughes, Alain Locke, Arna Bontemps, and Countee Cullen in the Harlem Renaissance.

Begin your journey into his oeuvre with his sophisticated and blues-influenced Symphony No. 2, "Song of a New Race" performed here by the Detroit Symphony Orchestra:

Learn more about his life.

Adolphus Hailstork received his doctorate in composition from Michigan State University, where he was a student of H. Owen Reed. He completed earlier studies at the Manhattan School of Music under Vittorio Giannini and David Diamond, the American Institute at Fontainebleau with Nadia Boulanger, and Howard University with Mark Fax.

Dr. Hailstork has written across a variety of genres, producing works for chorus, solo voice, solo piano, organ, various chamber ensembles, band, and orchestra. His works have been performed by prestigious ensembles such as the Philadelphia Orchestra, the Chicago Symphony Orchestra, and the New York Philharmonic, under the batons of leading conductors such as James DePreist, Daniel Barenboim, Kurt Masur, and Lorin Maazel. The composer’s music has been recorded by a variety of ensembles for the Naxos and Albany Records labels.

Fun fact: In January 2021, Hailstork celebrated the great honor of having his work Fanfare on Amazing Grace performed at the presidential inauguration by a group of the finest instrumentalists in the country, the President's Own United States Marine Band, under the baton of Colonel Jason K. Fettig, as arranged by MGySgt Don Patterson. This truly historic occasion marked only the second time in American history that music by a contemporary African American composer was selected to be part of the repertoire performed at a Presidential Inauguration.

Start your listening journey with his hair-raising Shout for Joy for brass quintet, timpani, organ, and chorus, here:

Then progress to his poignant Epitaph for a Man Who Dreamed, a piece focusing on Martin Luther King Jr.’s life and works, as performed by the Chineke! Orchestra, Europe’s first majority Black, Asian and ethnically diverse orchestra:

Continue your journey with the hustle and bustle of An American Port of Call:

To hear Dr. Hailstork speak about his works in his own words (including his requiem for George Floyd, A Knee on a Neck), watch his interview with Rei Hotoda of the Fresno Philharmonic:

Following his completion of military service in World War II, Hale Smith studied with Marcel Dick at The Cleveland Institute of Music, where he received his Bachelor’s and Master’s degrees before moving to New York City. In addition to composing, he worked as an editor, arranger and transcriber, eventually serving as a general advisor to several major music publishers.

Smith’s interest in a variety of musical genres was reflected in his use of both jazz techniques and modern innovations, such as serialism, in classical music.

He received awards from the Cleveland Institute of Music and the American Academy and Institute of Arts, in addition to the BMI Student Composer Award and the Cleveland Arts Prize. Mr. Smith lectured frequently at colleges and universities throughout the United States and held a Professorship at the University of Connecticut in the later part of his career.

Fun Fact: Mr. Smith not only wrote works that were performed by symphony orchestras around the country during his lifetime, but also pieces for jazz luminaries such as Eric Dolphy, Dizzy Gillespie, and Abby Lincoln, among others, and even performed as a jazz pianist himself.

Get a sense of his dense harmonic language through Innerflexions, a work for orchestra that builds in suspense as it progresses steadily towards its conclusion:

Let’s stop calling this man the “Black Mozart” and give credit where it’s due. To be perfectly clear: Mozart quoted HIM, not the other way around. Period.

Joseph Bologne was a powerhouse who was first known to the Parisian public as a champion fencer - the very best in France, in fact. Imagine their shock and delight to discover he was also a virtuoso violinist, making him a sensation after his debut solo performance in 1772. Not only that, but he was a prolific composer, composing twelve violin concertos, several large scale symphonic works, and six comic operas (just to name a few), an admired horseman, apparently quite the social dancer, and eventually the conductor of the leading orchestra in Paris, an orchestra which Marie Antoinette herself frequented. U.S. President John Adams called him “the most accomplished man in Europe.” Indeed.

Fun fact: He also fought on the side of the Republic in the first all-Black regiment in Europe during the French Revolution.

Get started on his incredible oeuvre with his Symphony No. 2, a work with an elegance, clarity and effortlessness that is the hallmark of his style:

Read more about his fascinating life.