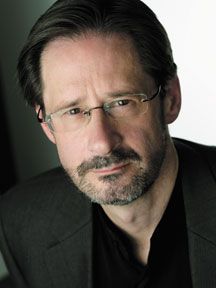 Composer Steven Stucky (1949-2016), whose Second Concerto for Orchestra brought him the 2005 Pulitzer Prize in Music, received commissions from countless orchestras, performing groups, individuals and foundations at home and abroad. The New York Times described his Second Concerto for Orchestra - commissioned by the Los Angeles Philharmonic and premiered by the orchestra in March, 2004 - as "an electrifying piece ... [that] stands apart from academic disputes about style and language, and strives for direct communication."

The 2014-15 season brought a number of important Stucky premieres and performances. Led by Artistic Director Steven Sametz, the Princeton Singers kicked off the season with the world premiere of Winter Stars, a setting of Sara Teasdale’s poem of the same name, in a special concert celebrating the chamber choir’s 30th anniversary. The Pittsburgh Symphony, under conductor Manfred Honeck, performed Silent Spring at Carolina Performing Arts in Chapel Hill, NC. The work, a one-movement orchestral tone poem in four sections, was commissioned during Stucky’s tenure as the orchestra’s 2011 Composer of the Year. His Piano Sonata received its world premiere by Gloria Cheng in the “Piano Spheres” series at Los Angeles’s Zipper Hall. And New York-based orchestral collective The Knights joined vocal soloists at Carnegie’s Zankel Hall for the New York premiere of The Classical Style, a new opera—Stucky’s first—composed to a libretto by MacArthur Fellow Jeremy Denk. The opera triumphed at its 2014 Ojai Music Festival debut, when it inspired a wealth of glowing praise.

Notable world premieres in recent seasons included Symphony (2012) at the Los Angeles Philharmonic; The Stars and the Roses at the Berkeley Symphony; Say Thou Dost Love Me (2012) for a cappella chorus with the New York Virtuoso Singers; Take Him, Earth at the American Choral Directors Association national conference; Rhapsodies (2008) by the New York Philharmonic at London’s BBC Proms; August 4, 1964 (2007-08) by the Dallas Symphony; the Chamber Concerto (2010) by the Saint Paul Chamber Orchestra; and the Piano Quintet (2009-10) at Portland’s Chamber Music Northwest festival. Other past highlights include high-profile repeat performances of Silent Spring (2011), which the Pittsburgh Symphony toured to seven key European cities; Andantino quasi Allegretto (Schubert Dream) by pianists Emanuel Ax and Yoko Nozaki for the Chamber Music Society of Lincoln Center (2011); the Chamber Concerto (2010) by the Saint Paul Chamber Orchestra under conductor Roberto Abbado; the "Elegy" from August 4, 1964, which the Dallas Symphony reprised at home and in Germany; and Radical Light (2006-07), which London’s Philharmonia Orchestra revived in Bonn. Stucky’s Pulitzer Prize-winning Second Concerto for Orchestra was commissioned and premiered by the Los Angeles Philharmonic in 2004.

Chanticleer's recordings of Mr. Stucky's Cradle Songs and Whispers, both on Teldec, won Grammy awards in 2000 and 2002, respectively. Released in 2004 were a collection of his chamber music performed by the Cassatt String Quartet and Ensemble X (Albany Records), his Son et lumière by the Albany Symphony (also on Albany Records), and Dreamwaltzes by the Singapore Symphony (BIS Records). To date, six different performances of his Funeral Music for Queen Mary have been commercially released. The year 2007 saw the releases of Sonate en forme de préludes by Deutsche Gramophon as a Chamber Music Society of Lincoln Center download; a performance by Michala Petri and the Danish National Symphony of his recorder concerto Etudes on Da Capo/OUR Records; and a BIS compilation of major orchestral works including Spirit Voices (with Evelyn Glennie), the Second Concerto for Orchestra, and Pinturas de Tamayo.

Mr. Stucky's relationship with the Los Angeles Philharmonic was the longest such association between an American orchestra and a composer. He was appointed Composer-in-Residence by André Previn in 1988, and was Consulting Composer for New Music - in which capacity he works closely with Music Director Esa-Pekka Salonen to enhance contemporary programming, to award commissions, to develop educational programs for school children, and to mentor aspiring pre-college composers under the ground-breaking Composer Fellows Program - for the remainder of his career. Mr. Stucky hosted talks in the LAP's Green Umbrella series with Marc-André Dalbavie and Leif Ove Andsnes, among others. He was also instrumental in the success of a similar series on the east coast, hosting the New York Philharmonic's "Hear and Now," informal public encounters with contemporary composers of works programmed by the Philharmonic.

An active teacher and mentor to young composers, Stucky served on the Warsaw jury of the Witold Lutoslawski Competition for Composers. His highly-esteemed expertise on the late composer’s music was recognized with the Lutoslawski Society’s medal and an ASCAP Deems Taylor Award for his critical biography, Lutoslawski and His Music (1981). He was consultant to the Philharmonia Orchestra’s 2013 centennial celebrations of the composer in London.

As conductor, Stucky frequently led the Los Angeles Philharmonic New Music Group and Ensemble X, a contemporary music group he founded in 1997. With the former, he led soloist Michala Petri in the US premiere of his recorder concerto, Etudes (2002), and conducted world and regional premieres of works by many of his contemporaries, such as Donald Crockett, Jacob Druckman, William Kraft, Witold Lutoslawski, Christopher Rouse, Joseph Phibbs, and Judith Weir.

Stucky was permanently employed as Composer-in-Residence of the Aspen Music Festival and School, having previously held that post in 2001 and 2010, in addition to serving as director of the Aspen Contemporary Ensemble in 2005. He was appointed as the first Barr Institute Composer Laureate at the University of Missouri at Kansas City. Among his other honors are a Guggenheim Fellowship, a Bogliasco Fellowship, the Goddard Lieberson Fellowship of the American Academy of Arts and Letters, the ASCAP Victor Herbert Prize, and fellowships from the National Endowment for the Arts, the American Council of Learned Societies, and the National Endowment for the Humanities. His first Concerto for Orchestra was one of two finalists for the 1989 Pulitzer Prize in Music. Stucky taught at Cornell University from 1980 to 2014, chairing the Music Department from 1992 to 1997, and then served as Cornell's Given Foundation Professor of Composition, Emeritus. He was Visiting Professor of Composition at the Eastman School of Music and Temple University, and Ernest Bloch Professor at the University of California, Berkeley. Stucky was a member of the faculty of the Juilliard School from 2014 to 2016.

Born on November 7, 1949 in Hutchinson, Kansas, Stucky was raised in Kansas and Texas. He studied at Baylor and Cornell Universities with Richard Willis, Robert Palmer, Karel Husa, and Burrill Phillips. Mr. Stucky passed away on February 14, 2016 in Ithaca, New York.