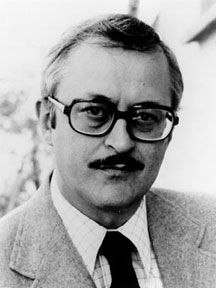 Robert Muczynski (1929-2010) has been described by Fanfare as "…one of our country’s best composers." Indeed, his works have travelled the globe with performances in the major cities of Europe, Australia, and the Orient. His orchestral and chamber music has been featured at Lincoln Center, The Kennedy Center, Orchestra Hall in Chicago, Wigmore Hall in London, and many other significant venues.

Muczynski studied composition with Alexander Tcherepnin at DePaul University, Chicago during the late 1940’s. His principal piano teacher during his undergraduate and graduate years at DePaul was Walter Knupfer. At age 29 Muczynski made his New York debut at Carnegie Recital Hall, performing a program of his own compositions for piano. At this time he was head of the piano department at Loras College in Iowa.

Meanwhile, Muczynski’s compositions were beginning to attract an international following. His Sonata for Flute and Piano received the Concours Internationale Prize in Nice, France, in 1961 and is now unanimously regarded by audiences, critics, and performers as an important addition to the flute repertoire.

Considered one of America’s most distinguished contemporary composers, Muczynski retired as Professor Emeritus from the University of Arizona, Tucson, in 1988 after serving as head of the composition department and composer-in-residence for 23 years. During these years he was the recipient of many honors, including a Pulitzer Prize nomination for the Concerto for Alto Saxophone and Orchestra, Op. 41. Other awards include two Ford Foundation fellowships and more than thirty ASCAP creative merit awards. His works for orchestra, chamber ensembles, solo instruments and chorus are now familiar throughout the world. Muczynski was also honored when his Second Piano Sonata was awarded first prize at the Fifth International Piano Competition in Sydney Australia, in 1992.