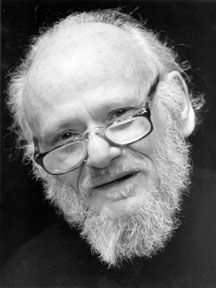 Born in Philadelphia in 1921, Ralph Shapey showed early talent as a violinist. He developed as a conductor during his teens, and was appointed the Youth Conductor of the Philadelphia National Youth Administration Symphony Orchestra when he was seventeen. However, at the age of nine, he was trying his hand at composition, and by his twenties, he was composing seriously.

As a composer, Ralph Shapey always pursued excellence in his own style, regardless of trends; and in a world that frequently places at least as much emphasis on the personality and image of the artist as on his work, he uncompromisingly held the idea that the music, once created, should stand on its own. His commitment to this attitude, refusal to compromise his integrity, and disillusionment with the musical climate of the time, led him to withdraw his compositions from 1969 to 1976, since he felt that people were unable to appreciate and perform his work for its own sake. While some may have had difficulty accepting his approach to music, the importance of Shapey's status in contemporary American music cannot be ignored. Although he acknowledged a deep respect for the classical masters of the past, and recognized their influence, his interpretation was wholly original. This led both Leonard Meyer and Bernard Jacobson to describe him as a "radical traditionalist."

In his conducting career, Ralph Shapey led many ensembles, including the Chicago Symphony Orchestra, the Philadelphia Orchestra, the Jerusalem Symphony, the London Symphony Orchestra, and the London Sinfonietta, with whom he recorded his Rituals for Orchestra. Well-known as a conductor, he was the founder and music director of the Contemporary Chamber Players of the University of Chicago, a group that celebrated its 25th anniversary in 1989. Under Shapey's leadership, the Contemporary Chamber Players became a highly respected group, establishing a reputation for excellence in their commitment to the presentation of new music. Shapey firmly believed in giving all styles of music a chance to be heard, regardless of personal taste.

While having once served on the music faculty of the University of Pennsylvania, it was his many celebrated years as Professor of Music at the University of Chicago where Shapey's work as a teacher had its greatest impact.

In a career which encompassed composition, conducting, and teaching, Ralph Shapey received numerous awards and commissions. He was Distinguished Professor of Music at Queens College in New York City in 1985. He was the recipient of a MacArthur Prize from the John D. and Catherine T. MacArthur Foundation (1982); the First Prize in the Kennedy Center Friedheim Competition (1990, for Concerto for Cello, Piano and String Orchestra); the Paul Fromm Award in 1993; a commission from the Philadelphia Orchestra for the bicentennial of the Constitution in 1987 (Symphonie Concertante); a commission from the Chicago Symphony Orchestra for a work to mark the centennials of both the orchestra and the University of Chicago, which was premiered in 1991 (Concerto Fantastique); and two commissions from the Library of Congress. He was elected in 1989 to the American Academy of Arts and Letters, and in 1994 to the American Academy of Arts and Sciences. In 1991, he retired from the University of Chicago, Professor Emeritus.