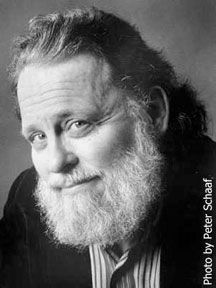 Composer, musician, author, satirist—Peter Schickele is internationally recognized as one of the most versatile artists in the field of music. His works, now well in excess of 100 for symphony orchestras, choral groups, chamber ensembles, voice, movies and television, have given him “a leading role in the ever-more-prominent school of American composers who unselfconsciously blend all levels of American music” (John Rockwell, The New York Times).

His commissions are numerous and varied, ranging from works for the National Symphony and the Minnesota Opera to compositions for distinguished instrumentalists and singers. Mr. Schickele’s SYMPHONY NO. 1 “Songlines” was premiered by the National Symphony under Leonard Slatkin, and has since been played by the New York Philharmonic, the Cleveland Orchestra, the Saint Louis Symphony Orchestra and other orchestras around the country. He is the recipient of five Grammies.

Peter Schickele has arranged one of the musical segments for the new Disney animated feature film, “Fantasia 2000.” He also created the musical score for the film version of Maurice Sendak’s children’s classic “Where the Wild Things Are,” issued on videocassette along with another Sendak classic “In the Night Kitchen” (Weston Woods), which Mr. Schickele narrates.

Among his many, diverse projects is a weekly, syndicated radio program, Schickele Mix, which has been heard nationwide over Public Radio International since January 1992 and won ASCAP’s prestigious Deems Taylor Award.

In his well-known other role as perpetrator of the oeuvre of the now classic P.D.Q. Bach, Peter Schickele is acknowledged as one of the great satirists of the 20th century. In testimony, Vanguard has released 11 albums of the fabled genius’s works; six have been released by Telarc. Random House has published eleven editions of The Definitive Biography of P.D.Q. Bach (which has also been translated into German, and is available as an audio book from the HighBridge Company); Theodore Presser has printed innumerable scores; and VideoArts International has produced a cassette of P.D.Q. Bach’s only full-length opera, The Abduction of Figaro. He tours annually with three programs featuring his own music as well as that of his alter-ego, P.D.Q. Bach: Peter Schickele Meets P.D.Q. Bach, Son of P.D.Q. Bach and P.D.Q. Bach and Peter Schickele: The Jekyll & Hyde Tour.

In the course of his career Schickele has also created music for four feature films, among them the prize-winning “Silent Running,” as well as for documentaries, television commercials, several “Sesame Street” segments and an underground movie that he has never seen in its finished state. He was also one of the composer/lyricists for “Oh, Calcutta,” and has arranged for Joan Baez, Buffy Sainte-Marie and other folk singers.

Peter Schickele was born in Ames, Iowa, and brought up in Washington, D.C. and Fargo, North Dakota. Schickele and his wife, the poet Susan Sindall, reside in New York City and at an upstate hideaway where he concentrates on composing. His son and daughter are involved in various alternative rock groups, both as composers and performers.