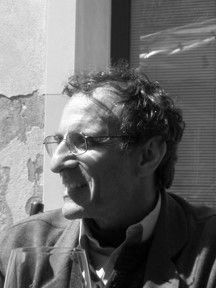 Composer Paul Salerni's music "pulses with life, witty musical ideas and instrumental color" (The Philadelphia Inquirer), and has been described by the New York Times as "impressive" and "playful."

Salerni is the NEH Distinguished Chair in the Humanities and Professor of Music at Lehigh University, where he teaches composition, theory, and directs the Lehigh University Very Modern Ensemble (LUVME). He is also founder and Artistic Director of the Monocacy Chamber Orchestra, a professional
Photo: Laura Johnson ensemble in the Lehigh Valley.

Salerni received his Ph.D. in composition from Harvard University, where he studied with Earl Kim. He has held composition fellowships from the Sheldon Foundation, the Charles Ives Festival, and the Pennsylvania Council for the Arts, and has been the recipient of grants from Meet the Composer and the NEA. He has also been guest composer at the Idyllwild School for Music and the Arts.

Salerni's one-act opera Tony Caruso's Final Broadcast, with a libretto by Dana Gioia, won the
National Opera Association's Chamber Opera competition. It premiered in Los Angeles in January 2008 in a co-production by the Los Angeles Opera, OperaWorks, CSU-Northridge, and the Southern California Opera Guild; a definitive recording was released on Naxos in October. His second one-act, The Life and Love of Joe Coogan, is adapted from a Dick Van Dyke TV Show episode. The original screenplay was written by Carl Reiner and adapted by librettist Kate Light. Joe Coogan had its premiere in September 2010.

As the leading expert on the music of his mentor Earl Kim, Salerni has a long history of collaboration
as guest pianist and lecturer with the internationally acclaimed string ensemble, Sejong. He has performed Kim's music with the ensemble in Korea, at the Kennedy Center, the 92nd St. Y, and the Aspen Music Festival. Sejong recently commissioned Salerni's arrangement of Piazzolla's Le Grand Tango and premiered it in Carnegie's Zankel Hall. That arrangement is published in Italy by Berben. In the summer of 2008, Salerni performed as pianist and conductor for two of Kim's works at the Great Mountains International Music Festival in Korea.

Salerni's passion for involving young people in music is evident in his choice of subject, audience, and performers for many of his compositions. The Big Sword and the Little Broom, a suite for solo violin and orchestra, is based on an old Neapolitan fable. Its chamber ensemble reduction, with narration by poet Dana Gioia, has been performed frequently in the United States and Canada in educational and family concerts; its full orchestra version was performed recently at the Interlochen Summer Arts Camp, where Salerni serves on the orchestral conducting faculty. Salerni's most recent commission for young people, Hugging the Shore (string orchestra and harp), will be published by Alfred this coming year.

A dedicated educator, Salerni is recipient of the Stabler Award, Lehigh University's most valued acknowledgement of excellence in teaching. His service to the larger community has also included participation on Fulbright Fellowship and NEA peer review panels and seven years' service on the Board of Directors of the Suzuki Association of the Americas, including two years as Chair of the Board.

Salerni is married to opera and stage director Laura Johnson, and also often writes for and performs with their two sons, violinist Domenic and percussionist Miles.