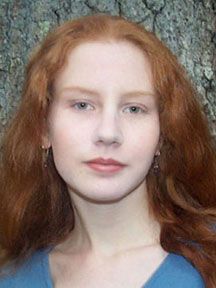 At the age of five, Julia Scott Carey developed her own notation system to record her compositions, and has been composing music ever since. Ms. Carey began her formal musical training in piano and theory at the age of six with Barbara Roth-Donaldson. At seven, she also studied harpsichord with Jim Nicolson, president of the Cambridge Early Music Society, and became a student at the Longy School of Music, studying composition and theory with Howard Frazin, Phil Ratliff and Patsy Sampson. For eight years, Julia attended the New England Conservatory of Music, where she was a composition student of Rodney Lister. At her graduation from the New England Conservatory Preparatory School, Julia received the Lanier Prize, becoming the first composition student elected most outstanding graduating senior by faculty vote. Julia is presently a sophomore at Harvard College and one of the first students accepted into in the newly created New England Conservatory - Harvard University combined degree program (AB Harvard 2008 / MM NEC 2009). She studies composition with Lee Hyla at the New England Conservatory.

Ms. Carey's chamber music compositions have been performed at concerts by the Boston Chamber Music Society, the Portland Chamber Festival, the Contemporary Music Festivals of the New England Conservatory, the Boston University Tanglewood Institute, and in master class with Gunther Schuller, Martin Bresnick, Alvin Singleton, John Harbison, Samuel Adler, Yehudi Wyner, Chen Yi and Stephen Hartke. Her orchestral works have been performed by nineteen orchestras, including the Boston Symphony Orchestra and the Boston Pops Orchestra under Keith Lockhart, the Indianapolis Symphony under Raymond Leppard. In 1999, a performance by the Boston Pops Orchestra of The Snow Queen (her first work for full orchestra, written at age 11), was televised over ABC affiliates and on the Arts and Entertainment (A&E) cable network in Holiday at Pops. Her works have also been broadcast on radio and television in Russia, and publicly performed in France, England and Ireland.

Julia has received a number of awards from the ASCAP, beginning with a citation for a three-movement string quartet written at age nine. She received seven consecutive Morton Gould Young Composers Awards for a variety of orchestral works, and four ASCAPlus Awards. Other prizes include the Marilyn K. Glick Young Composers Showcase Award, the National Guild of Community Schools of the Arts Young Composer Award (Second Place), the Harvard Music Association Composition Award, and the National Music Teachers Association Composition Award, and awards in the International Young Composers Festival in St. Petersburg, Russia, in 1998, 1999 and 2002. Closer to home, she has received composition prizes from the Massachusetts Music Teachers Association, the New England Pianoforte Teachers Association and the Rivers School of Music Contemporary Music Seminar. In 2001, Julia was chosen as a Pinnacle Scholar by the American Psychological Association (her mentor is conductor Beatrice Affron) and also was awarded a fellowship from the Davidson Institute for her achievements in music. Julia was one of four young composers invited to the National Youth Orchestra Festival in 2002. Julia was the principal guest composer of the Etowah Youth Symphony Orchestra for the 2004-2005 season (where her piano concerto premiered in May, 2005) and was one of six Boston-based composers commissioned by the Bank of America-Celebrity Series Rainbow Hexameron project, for a work which was premiered Sergey Schepkin in April, 2005.