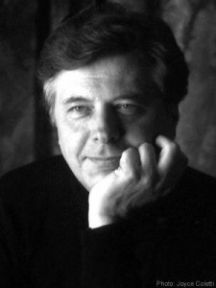 "Joseph Turrin is a greatly valued contributor to contemporary American musical life thanks to his wide-ranging activities as a composer, orchestrator, conductor, pianist, and teacher.

Since completing his formal education at the Eastman School of Music and the Manhattan School of Music, he has pursued a career that has always been multifaceted. As a composer, he has produced works in many genres. Among the many commissioned works in his catalogue, highlights include Hemispheres commissioned for Kurt Masur’s final concert with the New York Philharmonic in May 2002 and taken on tour by Masur and the orchestra to Europe and Asia in June 2002, his concertos for flute (commisioned for Carol Wincence and the New Jersey Symphony) and for trumpet (commissioned by the New York Philharmonic for Philip Smith, its principal trumpet, and conducted at its 1989 premiere by Erich Leinsdorf), the chamber works Riffs and Fanfares (The Chamber Music Society of Lincoln Center), Arcade (New Jersey Chamber Music Society), Quadrille (West Point Military Academy), Chronicles (twelve American Universities for Philip Smith), Modinha (Orpheus Chamber Orchestra) and numerous other commissions. The New York Philharmonic, both as an ensemble and through several of its individual members, has cultivated a longstanding relationship with Turrin. In addition to the new Hemispheres, the Trumpet Concerto (which Kurt Masur has also led with the Gewandhaus Orchestra in Leipzig), the Philharmonic-commissioned Two Gershwin Portraits (which Mr. Masur and the Orchestra premiered at the “New York 100 Celebration Concert” in Central Park in 1998, with trumpet soloists Wynton Marsalis and Philip Smith), Turrin has composed several pieces for the OrchestraÂ¹s brass section, including Jazzalogue No. 1 (featured on the Orchestra’s 1997 Latin American tour) and West Side Story Suite (commissioned and premiered at Carnegie Hall in 2000 by the Philharmonic’s brass section). In addition, he has composed numerous solo and chamber works to spotlight the talents of several Philharmonic musicians. Most recently, his Trombone Concerto Illuminations was recorded by Joseph Alessi for Summit Records. His Fandango was performed on “Live From Lincoln Center” in July, 2002 by Kurt Masur and the NY Philharmonic and hosted by Beverly Sills. This is what the NY Times said about his work Hemispheres: ""Mr. Turrin's music is nervous, loud, swift and aggressive to the point of violence. It is also beautifully made, negotiating its constant changes of speed and pulse with grace. Mr. Turrin's music is young: no past, only future.""

Active as a composer, and conductor for film and theatre, Turrin lists among his many credits the scores for Alan Alda’s film A New Life, Little Darlings, Weeds (with Nick Nolte), Tough Guys Don't Dance (directed by Norman Mailer), Verna-USO Girl (with Sissy Spacek and William Hurt and nominated for 3 Emmy Awards), Nightmare on Elm Street 3, Kingdom of Shadows (narrated by Rod Steiger), Broken Blossoms (1919 silent film classic directed by D.W. Griffith, starring Lillian Gish), and for the restoration of the silent film classic Sadie Thompson. Other silent film classics that he has scored include, Diary of a Lost Girl, Intolerance and The Hunchback of Notre Dame. His work in musical theater includes performances on Broadway with Michael Feinstein as well as the score for Frankie, with a libretto by Broadway legend George Abbott. Other theater works by Turrin include the opera Feathertop, Love Games and The Barricade. He also did the orchestrations for the 1992 Olympic Fanfare for the summer Olympic ceremonies in Barcelona, Spain.

Turrin has appeared as a conductor with the Pittsburgh, Baltimore, New Orleans, Detroit, and New Jersey Symphonies; he has performed as a pianist on many recordings and as orchestral pianist for the New Jersey Symphony. He has received awards and grants from the United Nations (for contributions in the arts), ASCAP, American Music Center, and five Fellowships from the New Jersey State Council on the Arts, in addition to the Ann M. Alburger Award for Chamber Music.

Kurt Masur said about Mr. Turrin's music: “I have always liked composers who are reflecting upon the musical sound of their country. Joseph Turrin does it in a very convincing way. I have taken great delight from getting to know his scores, which I have conducted in New York, in Europe, and in Asia.”

For more information about Joseph Turrin, please visit his website at www.josephturrin.com"