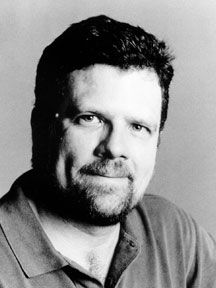 Jeff Nichols was born in 1957 and grew up in Indiana. He began composing at the age of nine, and soon thereafter started writing music inspired by the work of Barraqué, Boulez and Stockhausen (recordings of whose music, ironically, were more easily available in his local library than those of the Americans Babbitt, Carter and Martino, who became major influences at a later phase of his development). Nichols studied composition and piano at the Juilliard School and at Princeton and Harvard Universities. His principal teachers were Milton Babbitt and Donald Martino.

Nichols has composed music for a wide variety of instrumental and vocal ensembles. His style is characterized by its rhythmic vitality and its harmonic and textural richness. Exuberant, complex, fast-paced; the many contrasting moods evoked in his work are evident in these descriptions by critics:

"cram-packed and rhythmically eruptive...brash, perky and American"
(Anthony Tommasini on The Light Fantastic in The Boston Globe)

"A keen, busily plotted piece this was, always eager to get on with it, sometimes getting from here to there as if on skateboardswhat an imaginative phrasing of line, what delightfully crooked arpeggios and vagrant trills, what a kaleidoscope of changing timbres! Talk about textural aliveness: some of it sounded as if it could have been written by the instruments themselves. Had enough of Michael Torke's ice-cream soda aesthetic? Here's your antidote"
(Richard Buell on The Light Fantastic in The Boston Globe)

"The music is delicate, luminous, gestural and self-contained, yet always threatening to bust open with insistant riffs. The harmonies are fetching, the music has a rhythmic swing, not just a motoric beat but an undulant, temporal arc"
(Anthony Tommasini on Take-off II in The Boston Globe)

Nichols' works have been performed by many of the finest new-music ensembles in the U.S., as well as at festivals in Aspen, Edinbourgh and Taegu, South Korea. He was a member and, from1987-1990, president of the Griffin Music Ensemble in Boston. With Mario Davidovsky and Bernard Rands he currently directs the new Fromm Ensemble at Harvard. Nichol' awards include a Guggenheim Fellowship, a commission from the Fromm Music Foundation and two fellowships to the Wellesley Composers Conference. His music is published by Theodore Presser Company and C.F. Peters. From 1990-94 he was on the faculty of Columbia University. He currently is an Associate Professor at Harvard University.