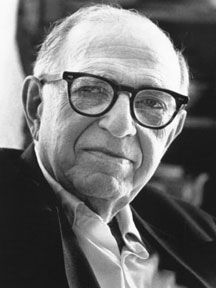 "One of America’s most important opera composers, Hugo Weisgall’s output also included orchestral, chamber and choral works, eight major song cycles, and music for ballet. His opera Six Characters in Search of an Author brought Weisgall national acclaim when it was first performed by the New York City Opera in 1959. The same company commissioned and performed his Nine Rivers from Jordan in 1968, and later staged his Esther, based on the biblical story. His other operas include Athaliah, The Gardens of Adonis, Jenny/or The Hundred Nights, Will You Marry Me?, The Tenor, and his most frequently performed opera, The Stronger.

A descendent of four generations of cantors, Weisgall was commissioned by the Friends of the Library of Jewish Theological Seminary to write a song-cycle for the 500th anniversary of the expulsion of the Jews from Spain. Among his more personal works were children’s pieces written for his grandchildren.

Born in Czechoslovakia, he came to the U.S. in 1920 with his parents. During World War II, he was assistant military attaché to the governments-in-exile in London, and later served as cultural attaché in Prague.

His work was recognized by the Ford Foundation, the National Endowment for the Arts, and the Guggenheim Foundation. He twice served as composer-in-residence at the American Academy in Rome, was President of the American Music Center for 10 years, and also served as President of the American Academy and Institute of Arts and Letters. Former director of the Composer-in-Residence program for the Lyric Opera of Chicago, he at various times served on the faculty of Queens College, the Juilliard School, and the Jewish Theological Seminary in New York.