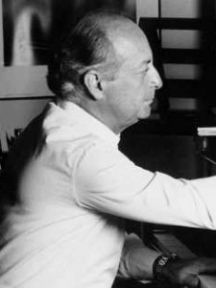 Taking his cue from the great masters of the past, Henri Lazarof is a composer committed to the constant development of his art. In his search for new ideas and forms Lazarof has produced a unique and varied catalog of scores that has been acclaimed in major musical centers from Tokyo to San Francisco, and from Oslo to Cape Town. An American citizen who makes his home in Los Angeles, Lazarof is, however, a man of the world whose art transcends both geographical and idiomatic boundaries. He is a demanding self-critic, constantly searching for the ultimate in expression while experimenting with the latest style trends. Lazarof has not suffered from neglect by the professionals: leading orchestras such as the Berlin Philharmonic, ballet companies like the San Francisco Ballet, and distinguished chamber music groups, plus famous soloists have featured his music. Lazarof has successfully proven that there is both an audience and a market for well-constructed, meaningful contemporary music.

Born in Sofia, Bulgaria on April 12, 1932, Lazarof began his musical training at the age of six. Coming to the United States in 1957, Lazarof studied at Brandeis University on a full scholarship with Arthur Berger and Harold Shapiro and in 1959 received the degree of Master of Fine Arts. It was during his stay at Brandeis that Lazarof began to receive attention for his pronounced creative gifts. In 1958 his String Quartet was awarded First Prize from Boston's Brookline Public Library, while his Cantata received a commission from Brandeis University for its 1959 Arts Festival.

In 1959 Lazarof moved to the west coast where he commenced a lifelong association with the University of California, Los Angeles. Beginning there as a teacher of French language and literature, Lazarof joined the Music Department in 1962, and is now Professor Emeritus. A natural protagonist of modern music, Lazarof organized the 1963 Festival of Contemporary Music, which featured works and lectures by Berio, Stockhausen and Leonard Stein. During the same season the New York Times hailed his new work, the Concerto for Piano and 20 Instruments, as "theatrical and colorful."

Lazarof's international reputation grew in 1966 when he was awarded the first International Prize of Milan for Structures Sonores. A tireless worker, Lazarof completed seven major works during 1970-71, when the West German government named him Artist-in-Residence in West Berlin. Then, in 1971, he was named the first recipient of the University of California's Institute for Creative Arts Award.

Returning from his Berlin residency, Lazarof was named Artistic Director of the 1973 Contemporary Music Festival at U.C.L.A., and Los Angeles enjoyed two active seasons of new music. Lazarof further contributed to the musical life of Los Angeles by commissioning four works which were premiered during the 1974-75 Festival. Also in 1974, Arthur Weisberg presented Lazarof's Third Chamber Concerto in Carnegie Recital Hall as well as the first of what were to be dozens of performances of his Duo-1973.

The Concerto for Orchestra, written in 1977, won second place in the Kennedy Center Friedheim Awards. Lazarof's works have since been nominated for many other awards, including the University of Louisville Grawemeyer Award and the Grammy.

One of the busiest and most prolific composers of his generation, Henri Lazarof's 65th birthday year was marked by more than a dozen tribute performances of his music, including several premieres and new recordings. In 1998, his In Celebration for Chorus and Orchestra was the centerpiece work for the Grand Opening of the Seattle Symphony's new concert hall.

By refusing to settle within any one ideology of style - even those of his own previous works - Lazarof has remained faithful to the principle of growth and exploration, producing a body of works that will endure.

"The world is big enough for all kinds of composers" says Lazarof. "I try to always write for new instrumental forces - to search out the limits of the performer and one's own limits as a composer."