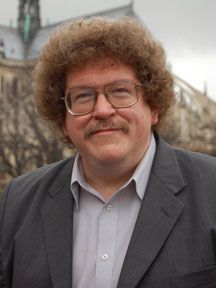 Born in Cleveland, Ohio, and receiving his Bachelor's of Music Degree from Eastman, and Master's and Doctorate Degrees from The Juilliard School, Eric Ewazen has written many chamber works for brass, winds, percussion and increasingly strings, piano, and voice that have become standards of the repertoire. His music in all genres: including orchestra, wind ensemble and chorus: has been performed around the world with great acclaim. Distinguished soloists and chamber ensembles performing his music include players as diverse as percussionist Evelyn Glennie, the American Brass Quintet, and the Ahn Trio; trombonists Charles Vernon, Joseph Alessi, Ronald Barron, Christian Lindberg, Nitzan Haroz, David Taylor and James Lebens; clarinetists Franklin Cohen and Larry Combs; flutists Elizabeth Rowe, Mindy Kaufman, Julius Baker and Jan Gippo; trumpet players Chris Gekker, David Bilger and Philip Smith; among many others from major symphonies around the world, including the Vienna Philharmonic, the Berlin Symphony, the Concertgebouw, the Paris Opera Orchestra, the London Philharmonic, and noted players from major symphonies and orchestras in every state of the U.S.

His music can be heard on over 60 commercially released CDs, and over 400 Youtube clips.

He received his Bachelors of Music Degree from the Eastman School of Music and Masters and Doctorate Degrees from The Juilliard School, where he has been a member of the faculty since 1980. His teachers have included Samuel Adler, Milton Babbitt, Warren Benson, Eugene Kurtz, Gunther Schuller and Joseph Schwantner. He was Composer-in-Residence with the St. Luke's Chamber Ensemble, and Vice-President of the League of Composers - International Society of Contemporary Music.

For the 2011-12 season, he has been commissioned to write a Concerto Grosso for Three Trombones and Orchestra for the Buffalo Philharmonic and the Virginia Symphonies, with JoAnn Falletta. The Virginia Symphony will also be performing his "Hymn for the Lost and the Living", an In Memoriam to 9/11, orchestrated by Otto Werner Mueller, on the 10th anniversary of 9/11. Three solo CDs of his music will be released in 2011, all on Albany Records: one devoted to his chamber music for flute, performed by Marya Martin with the Bridgehampton Chamber Musicians; another to his trumpet music, featuring Chris Gekker, Nathaniel, and James Lebgens; and a third devoted to his music for wind ensemble, featuring the University of Memphis Wind Ensemble.