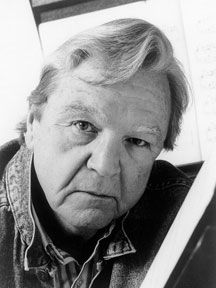 Described by Nicolas Slonimsky in the Baker's Biographical Dictionary of Musicians as a "significant American composer," Donald Erb was born in Youngstown, Ohio in 1927. His orchestral music has been played by literally every major orchestra in the United States and by many eminent ensembles in Europe and Australia. He has received major commissions from the Chicago Symphony, the Cleveland Orchestra, the St. Louis Symphony, the Baltimore Symphony, the Dallas Symphony and the Houston Symphony among many others. His composition The Seventh Trumpet has been performed more than two hundred times by over fifty orchestras in the United States and abroad, and was chosen as the United States representative to UNESCO in 1970. Among his orchestral works are ten concertos, which have been premiered by such artists as Lynn Harrell, Richard Stoltzman, Stuart Dempster and the brass section of the Chicago Symphony Orchestra.

Mr. Erb's early interest in electronic music led to the completion of Reconnaisance, one of the first chamber works for live synthesizer and acoustic instruments. Written in 1965, Reconnaisance was premiered on Music in Our Time in New York with Robert Moog operating the synthesizer. It was presented at Expo '67 in Montreal and, later, on Monday Evening Concerts in Los Angeles. Mr. Erb's chamber music has been performed by major artists around the world at the Warsaw Autumn, Darmstadt and Tanglewood Festivals and by the groundbreaking Group for Contemporary Music. His early experience as a jazz trumpeter has inspired Erb's many compositions in that medium, including one for jazz great Jim Hall, a longtime friend.

Donald Erb taught composition for over fourty years at such schools as Southern Methodist University, Indiana University, Melbourne University and the Cleveland Institute of Music. He holds the title of Distinguished Professor Emeritus of Composition at the Cleveland Institute of Music where, in 2000, his lasting contributions to the conservatory were celebrated with a concert in his honor and the creation of a scholarship in his name. Over the years, Mr. Erb has been in demand as a visiting lecturer and has given master classes and concerts at well over one hundred colleges, universities and conservatories in the United States. In addition to his work in the classroom, Mr. Erb has served as Composer-in-Residence for the Dallas Symphony Orchestra and the St. Louis Symphony Orchestra, and he authored the major article on orchestration for the Encyclopedia Britannica.

Mr. Erb has not only helped to pioneer the acceptance of electronic sounds in conventional music circles, but has also helped to extend the use of traditional instruments beyond their normal limits. His works often require instrumentalists to play in unusual ranges or in unconventional ways : piano strings may be struck with mallets; trumpet mouthpieces may be removed and played without the trumpet. The total effect is extremely colorful, demonstrating the composer's expert sensitivity to sound. Although Erb sometimes uses aleatoric methods, his compositions always have form as well as freedom; he never loses control of them. Of his music, Mr. Erb has said: "A craftsman can create entertainment, but you need more than that to create art. You need an emotional, inspirational quality, because in and of itself craft means nothing. There has to be something inside you pushing out or all a person will ever write is a craftsman-like piece. And that's not quite good enough."