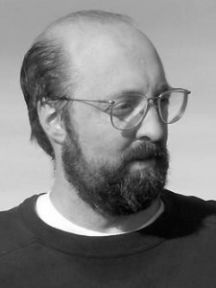 David Crumb was born in 1962 into a musical family. His father is world-renowned composer George Crumb; his sister, Ann Crumb, is well known as a singer/actress who has appeared on Broadway, and is now actively involved in performances of contemporary music. David Crumb studied cello and piano from an early age. Later, he pursued advanced training in cello at the Eastman School (from 1980-83) before ultimately switching his focus to composition. His first important teacher, Samuel Adler, provided the initial spark that inspired him to pursue this new direction. After graduating from Eastman, he enrolled in graduate studies at the University of Pennsylvania, where he studied composition with Jay Reise, Richard Wernick, Chinary Ung, and Stephen Jaffe. In 1987, Crumb received a fellowship to attend the Tanglewood Music Center where he attended master classes held by Lukas Foss and Oliver Knussen. Shortly thereafter, he traveled to Jerusalem, Israel to study composition and counterpoint with Russian-born composer Mark Kopytman. While attending the Rubin Academy, Crumb composed what he now considers to be his first mature work: Joyce Songs for mezzo-soprano, flute, clarinet, and cello (1989). Crumb received his first major commission from the Chicago Civic Orchestra (with support from the ASCAP Foundation); the resulting work, Clarino, was premiered in Chicago's Symphony Hall June 1991, and served as Crumb's dissertation, for which he was awarded a Ph.D. in 1992.

Over the years, Crumb's music has been performed throughout the United States and abroad. His orchestral works have been performed by the Utah Symphony, the Baltimore Symphony, the Cleveland Chamber Symphony, and the Chicago Civic Orchestra; his chamber works by the Los Angeles Philharmonic New Music Group, Orchestra 2001, the Cassatt Quartet, the Parnassus Ensemble, Voices of Change, Music at the Anthology, The Chicago Ensemble, Nextet, Musiqa, Bent Frequency, Third Angle, Network for New Music, Percussion Plus Project, Café MoMus, Quattro Mani, and many others. A recipient of the Guggenheim Fellowship, he has received commissions from Portland Piano International, the University of Houston Percussion Ensemble, the Fromm and Barlow Foundations, the Los Angeles Symphony New Music Group, the National Association of Wind and Percussion Instructors, and the Bowdoin International New Music Festival. He has held residencies at the Yaddo and MacDowell artist colonies and participated in numerous festivals including La Biennale di Venezia, Cincinnati Conservatory's “Music 2005,” and Bowling Green State University's 21st Annual New Music & Art Festival. Crumb has served as composer-in-residence at the Oregon Bach Festival Composers Symposium, and was the featured guest composer at Washington State University's "2005 Festival of Contemporary Art Music."

Crumb is the recipient of numerous honors, including a Guggenheim Fellowship, a John D. and Catherine T. MacArthur Foundation Residency Award, an Aaron Copland Award, and a Los Angeles Symphony “L.A. Composers Project 2” Award. His composition Mood Sequence was awarded the 2014 Heckscher Prize from Ithaca College.

Crumb joined the music faculty at the University of Oregon in 1997, where he continues to serve as Professor of Composition and Theory.