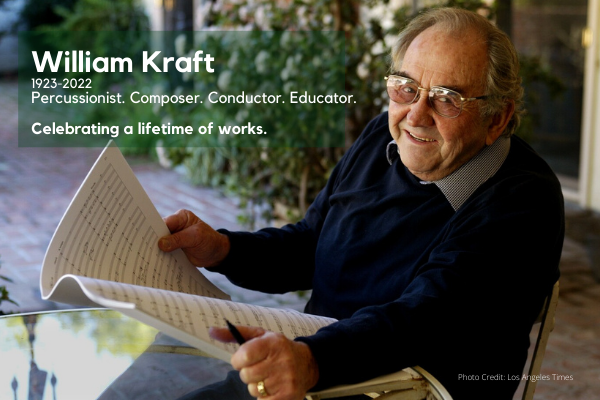 William Kraft (Sept. 6, 1923 – Feb. 12, 2022) had a long and active career as a composer, conductor, percussionist, and teacher. As a composer, he was best known for his for percussion works and film scores. Kraft was the recipient of many awards during his lifetime, including two Kennedy Center Friedheim Awards, two Guggenheim Fellowships, two Ford Foundation Commissions, The Forte Award, fellowships from the Huntington Hartford Foundation and the National Endowment for the Arts, the American Academy and Institute of Arts and Letters Music Award, the Norlin/MacDowell Fellowship, the ASCAP Award, the NACUSA Award, the Eva Judd O'Meara Award, and First Place in the Contemporary Record Society competition.

Kraft’s early musical training was in piano and percussion at San Diego State College (now University) and UCLA. During World War II, he served overseas in the military as a pianist, drummer and arranger in army bands, and he briefly played in jazz bands after the war before embarking on a serious musical career. That led him to study conducting with the young Leonard Bernstein at Tanglewood in 1948. Kraft earned his Bachelor’s and Master’s degrees from Columbia University, where he received two Anton Seidl Fellowships, studying with Henry Brant, Henry Cowell, Otto Luening, Morris Goldenberg, Saul Goodman, Rudolph Thomas, and Fritz Zweig.

During his early years in Los Angeles, Kraft organized and directed the Los Angeles Percussion Ensemble, a group which played a vital part in premieres and recordings of works by such renowned composers as Ginastera, Harrison, Krenek, Stravinsky, and Varese. Kraft served as Stravinsky's timpanist and percussionist in charge of all percussion activities for the composer's Los Angeles performances and recordings. As a percussion soloist, he performed in the American premieres of Stockhausen's Zyklus and Boulez' Le Marteau sans Maitre. Kraft played with the LA Philharmonic for 26 years; eight of these as a percussionist, and 18 as Principal Timpanist. He also served as assistant conductor of the orchestra and, thereafter, as a frequent guest conductor. Mr. Kraft also served as the Los Angeles Philharmonic's Composer-in-Residence for four seasons, during which time he was appointed by executive director Ernest Fleischmann to serve as the founding director of the Philharmonic New Music Group. He served as the Corwin Professor of Music Composition and Chairman of the Composition Department at the University of California, Santa Barbara for 11 years (1991-2002), and, upon his retirement from the faculty, was endowed with the title of Professor Emeritus. 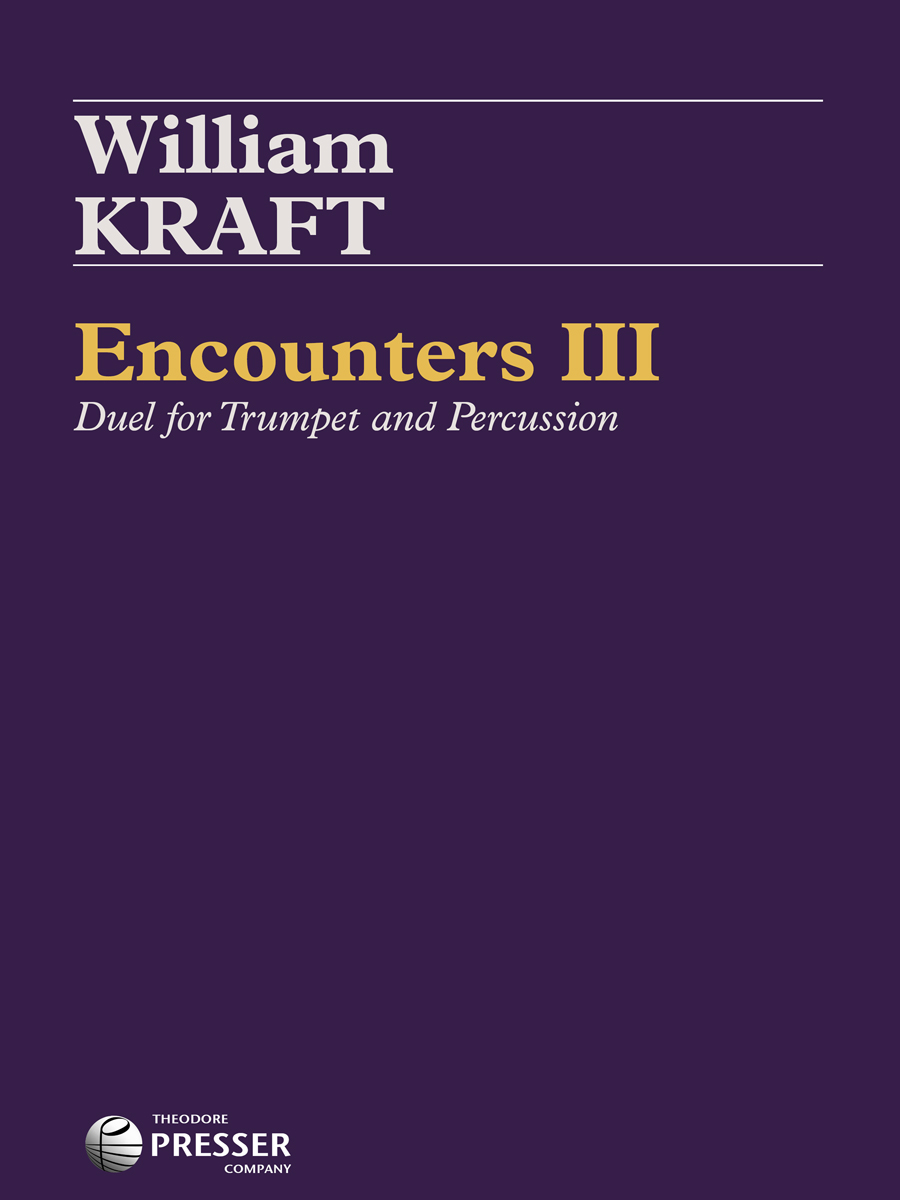 These works serve for Kraft the way the string quartet did for Beethoven or Shostakovich, as a kind of autobiography in chamber music... a monument both to Kraft and the world of percussion.

No one with the slightest interest in the music of our time can afford to be without this cornerstone of American chamber music.

Kraft used a variety of compositional techniques throughout his career. He focused on serialism in the 1960s and 1970s, while in the 1980s he incorporated jazz rhythms and impressionistic harmonies into his music. Some of his most noted works include his Concerti (Timpani, Piano, Multiple Percussionists, Violin), 15 Encounters, and his many pieces for Solo Percussion. His music can be found on the Harmonia Mundi, CRI, Cambria, Albany, Crystal, and Nonesuch labels, among others.

Many notable ensembles have performed Kraft's music, including the U.S. Air Force Band, the St. Paul Chamber Orchestra, the Kronos Quartet, Voices of Change, the Schoenberg Institute, the consortium of Speculum Musicae/San Francisco Contemporary Music Players/Contemporary Music Forum, the Boston Pops, the consortium of Pacific Symphony/Spokane Symphony/Tucson Symphony, and the Los Angeles Philharmonic. In celebration of the many recordings of Kraft's work now available, we’ve created curated playlists featuring a variety of his compositions. Click below to save these playlists to your library and enjoy repeated listens. 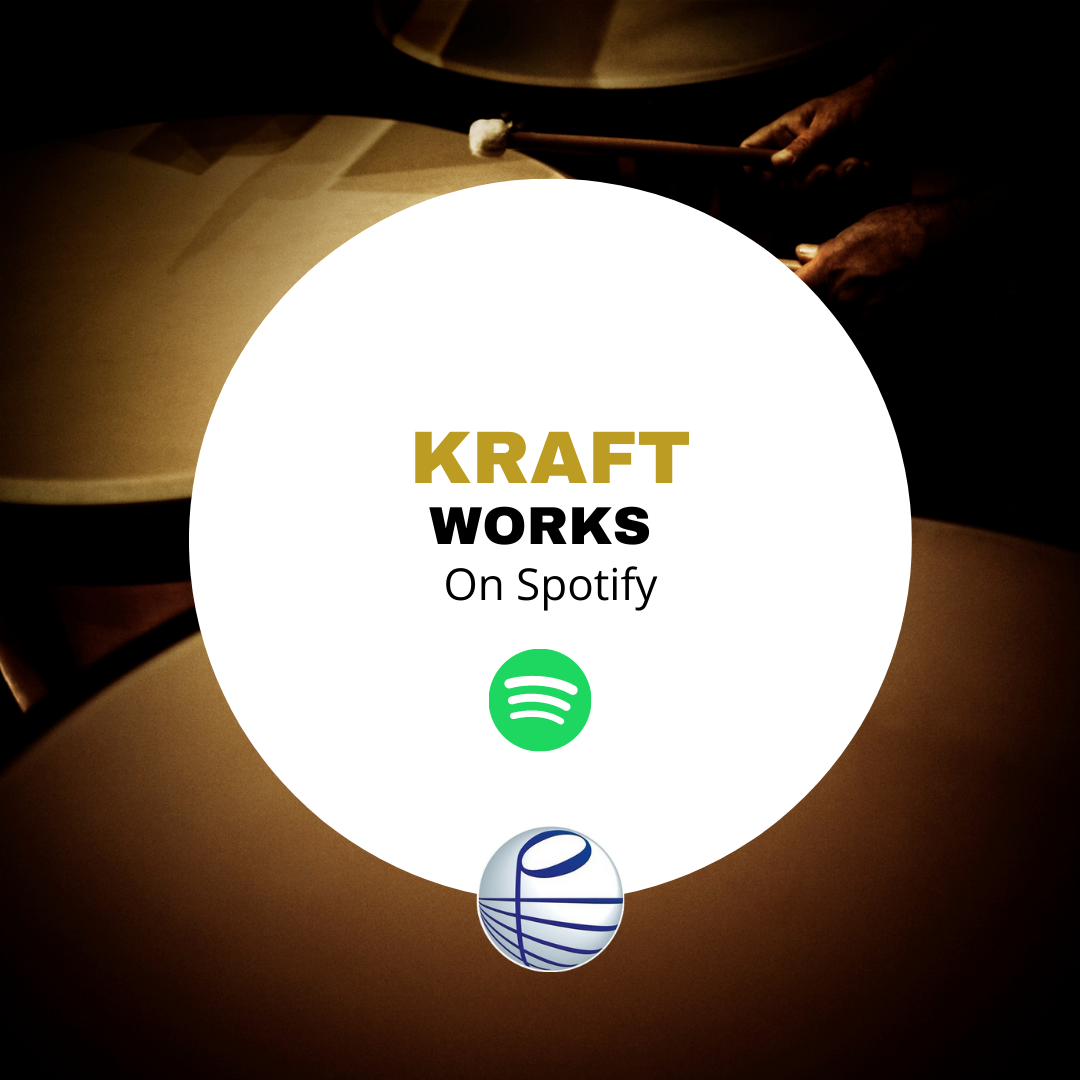 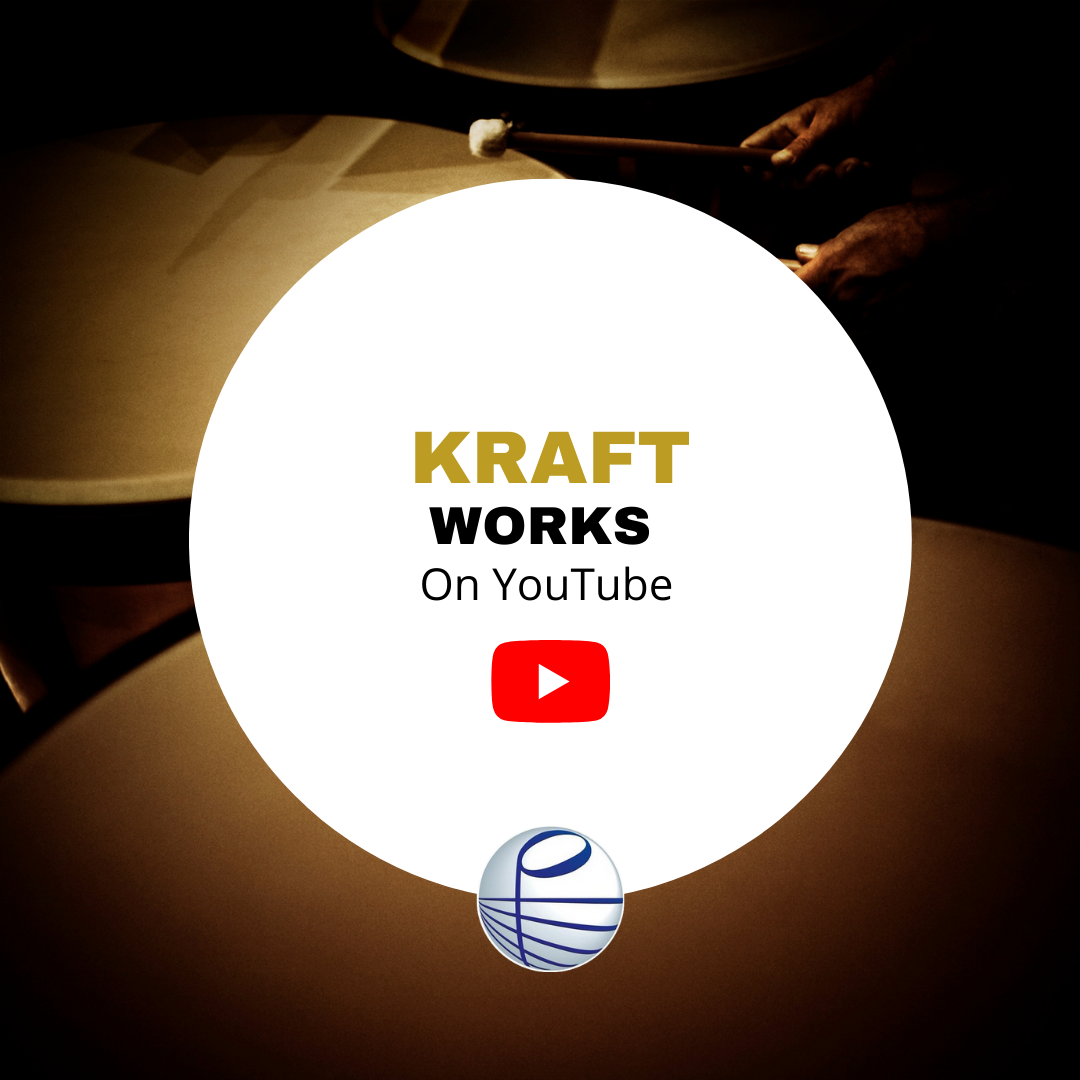 William Kraft played a long and indispensable role in making Los Angeles a world capital of new music while elevating the function of percussion instruments to new heights. His compositions changed the landscape of the 20th-century Classical world, and his influence continues to be felt today through the activities of those whom he mentored. Learn more about his life and see a full catalog of his works here. 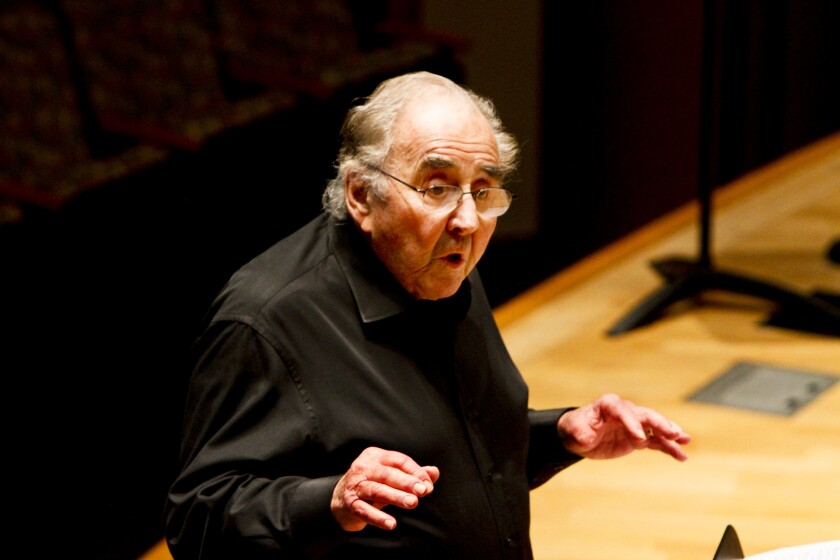 I didn’t find it possible, really, to enjoy composing if it didn’t have some of me in there. So I would distill. I remember doing one piece, the first movement of Contextures, totally serialized, and when I got through with it I said, “Wow, I’m going to take this to the piano and see if it really does sound the way I think it does sound.” I thought I heard everything, but it was very complex, and when I played it through, I said, “Oh, yes, it sounds like every other work I’ve heard that is totally serialized.” There’s a certain kind of randomness and lack of personal intention in the piece. So I just took things out here and there so that I had some control as to when things happened. That’s what I think is the most important thing, to be able to control the event by your own psyche. Your personality gets into it that way.