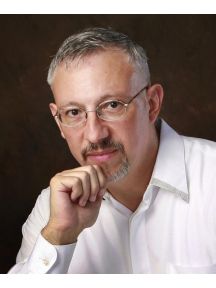 Three-time Grammy nominated American composer MIGUEL DEL AGUILA was born 1957 in Montevideo, Uruguay. In more than 115 works that couple drama and driving rhythm with nostalgic nods to his South American roots, he has established himself among the most distinctive and highly regarded composers of his generation. His music has been performed worldwide by over 96 orchestras, by thousands of ensembles and soloists, and recorded on 34 CDs.

He was honored in 2010 with two Latin Grammy nominations, for his CD Salón Buenos Aires, and for his work Clocks. 2015 he received a third Grammy nomination for Concierto en Tango which two years after its premiere has been scheduled for 27 orchestra performances worldwide. His works are recorded on Naxos, Dorian, Telarc, New Albion, Albany, Centaur, and Eroica, among others.

After graduating from the San Francisco Conservatory he studied at the Hochschule für Musik in Vienna where early premieres of his works won him praise from audiences and press. In 1989 he introduced his music at New York’s Carnegie Recital Hall, Lukas Foss premiered his Hexenwith Brooklyn Philharmonic, and his first CDs were released.

After 10 years in Vienna, Aguila returned to the U.S. in 1992 where soon the Los Angeles Times described him as “one of the West Coast’s most promising young composers.” He received the Kennedy Center Friedheim Award 1995 and by the 1990s his works were performed at Lincoln Center, London’s Royal Opera House, and in most European capitals. 2001-2004 he was Resident Composer at Chautauqua Festival and 2005-2007 Composer in Residence with the New Mexico Symphony through a New Music USA/Music Alive Award. His residency culminated in premiere of his third opera Time and Again Barelas. He received a New Music USA/Magnum Opus Award in 2008, the Lancaster Symphony Composer of the Year Award 2009, and Copland Foundation awards, among others.