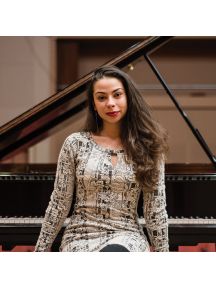 Lora Al-Ahmad is a pianist and a composer born in Sofia, Bulgaria. She began playing piano at the age of six and studied with Rozamira Komitova from 2001 until 2005. During this time, she won numerous prizes in piano competitions for the very young. In 2005, after a successful audition, she was accepted in the class of Alexander Vassilenko at the National Music School "Liubomir Pipkov" in Sofia. She has performed in numerous performances and events in her native city and country, including the appearance with Orpheus Chamber Orchestra in Sofia. Lora has participated in masterclasses given by Pavlina Dokovska, Plamena Mangova, Alexander Hinchev, Liudmil Angelov (which culminated in a performance at the Bulgaria Hall in Sofia), Maria Princ, Oivin Ose, Jerome Rose and Szokolay Balazs (which culminated in a performance at the Festetics Palace, located in the town of Keszthely, Zala, Hungary). In addition, she won prizes at Sixth International Piano Competition "Liszt-Bartok" in Sofia (Second Prize), Twenty-First National Competition "Svetoslav Obretenov" in Provadia (Third Prize), Seventh International Competition "Classic and Contemporaneity" (First Prize and Special Prize for the performance of the Bulgarian piece). She was one of the recipients of the "Lidia Kuteva" Scholarship and is a Scholar of the Ministry of Culture.

In 2013, Lora was accepted into the undergraduate program at Mannes College The New School for Music in New York City in the class of Pavlina Dokovska, after a highly competitive audition, as a recipient of a Presidential Merit Scholarship Award. She started studying composition with Prof. David Loeb in 2014, as an independent study at Mannes. Since then she has actively composed and has had the opportunity to have her pieces performed by her colleagues.

In 2015 she made her debut at Carnegie's Weill Recital Hall as a soloist and chamber musician for the series of concerts "Musical Treasures in Bulgaria". She has also appeared as a soloist in Paris (France), Washington DC (USA), Sibiu (Romania), Kesthely (Hungary).

In 2017 she received First Prize for best Bartok Performance at “GCC Series', based in the United Kingdom.

​Ms. Al-Ahmad graduated from Mannes College with honors in 2017. She was chosen by the Mannes Awards Committee to be the 2017 recipient of the Joseph Fidelman Memorial Award, given to a pianist who has demonstrated significant accomplishment in the area of new music performance. She also received an award from Mannes Prep Pre-College division for hard work, dedication and “good sense of humor”, for working with the students.

​After a highly successful piano audition for the Master’s program at Mannes College, Lora was accepted with a full scholarship, winning the Presidential Scholarship Award. She completed a Double Major Master’s degree in Piano Performance and Composition at Mannes, studying with Pavlina Dokovska, Vladimir Valjarevic, and Lowell Liebermann.

She actively performs in various venues in New York City.

​In May 2018, Lora had a world premiere of her piece for Viola and Piano “Physics of Sorrow” at the Bohemian National Hall in New York City. She was commissioned to write it based on the novel “Physics of Sorrow”, by internationally renowned author Georgi Gospodinov. In July of that year, Lora attended the prestigious summer session at the Conservatoire Americain de Fontainebleau in France, where she was accepted with a full scholarship.

Recently, the principal flutist of the Chicago Symphony orchestra and internationally distinguished soloist and chamber musician, ​Stefán Ragnar Höskuldsson, programmed Lora’s two “Skazkas” for solo flute in his recital at Chicago’s Art club in June. Later in 2018, he also performed them in St. John’s Smith Square in London, UK. Two “Skazkas” were published by Theodore Presser in 2019.

​Ms. Al-Ahmad has given numerous radio interviews in Bulgaria, including her appearances at the Bulgarian National Radio “BNR”, and “Darik” Radio.

In May 2019, the last concert of the series “Musical Treasures from Bulgaria”, was dedicated to Lora as a composer and pianist. The performance took place at Carnegie’s Weill Recital Hall.